The annual Food and Drink Festival, organised by Bolton Council, is one of the best in the country, attracting thousands to the town centre each August bank holiday weekend, featuring celebrity chefs, including festival regular James Martin.

The Museum’s newly-renovated Egyptology department has a collection that is arguably one of the most important in a British local authority museum, numbering around 12,000 objects.

Ironman UK has become a regular summer fixture, as competitors from across the globe compete in an incredible feat of endurance.

The beautiful countryside of the West Pennine Moors is on the town’s doorstep. Bolton Wanderers Football Club, which plays at the University of Bolton Stadium in Horwich, was a founder member of the football league in 1888 and has a long and proud in the local community. 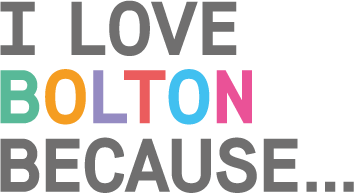 We are running a weekly draw competition in partnership with Tower FM from 5 June until midnight on 30 June 2019!

To enter, simply submit the form to tell us why you love Bolton and you could be in with a chance of winning a prize!

Enter as many times as you like. Winners will be announced each Wednesday morning on Tower FM and their response to 'I Love Bolton because...' will be shared live on air!

Keep an eye out for the Tower FM team at the following locations for more chances to enter: